After writing about my experiences regarding my mental health this last week, a friend of mine here in Koh Samui asked me a great question. My last post on paranoia had left her hanging. She knew everything that was going on during and after my crisis, but never talked to me about it out of respect, probably not to put me in an uncomfortable position.

She wants to understand how I began to see more clearly, to accept that I was paranoid.

I am trying to understand that myself.

I spent a few months after being hospitalized thinking that Maher, the rest of my family, and the doctors were conspiring against me, that saying I was mentally ill was part of the “plot” against me, to control me.

I was in denial.

Some of the most important moments of change and acceptance happened gradually, as I started to open up. I talked to some close friends about my situation and I assumed they knew what had happened to me because in my mind, in my paranoia, they were in the “plot” at first supporting me, and then going against me.

But, the more I saw the looks of surprise on their faces, their shock that I was hospitalized, on medication etc, the more I started to realize that most people around me actually had no idea. Even those I considered close.

So they couldn’t possibly have been in any sort of plot.

“Maybe it is mental illness?”, I began to doubt myself.

Thankfully with Maher’s encouragement that I open up, be more honest with my trusted friends, now more broadly, I am able to see more clearly.

Another important point was that Maher stood firmly on his ground. He never entered into my paranoia when I shared my wild thoughts with him. He remained rational and in control. That gave me a strong boundary.

I am grateful to a friend of mine who once told me how she lived her childhood guarding family secrets. Now that she has her own daughter she has chosen to break the family pattern and decided to be more open to herself, to her daughter, and to friends. She inspires me to have more sincere friendships, to share my experiences, thoughts and feelings openly.

AS I said in my last post, being open and direct is part of my healing process.

Thank you for continuing to read, for the support and for helping me understand all of this better.

I appreciate the thoughts, comments, and questions.

A year and a half ago my mental health crashed. I needed a medical evacuation out of Samui and a hospital stay in Bangkok of half a month, followed by a gradual unraveling of symptoms and a continual healing process.

My yoga practices slowed down over this period of time for which there was guilt involved, but I feel that now I have found a healthy balance of activities.

What brought me to yoga initially was the thought that I might get closer to Indian culture, the realization that it could heal my body from injury, and the more I got into it, that it was a powerful tool to help me know myself.

I immersed myself in yoga practices for the last 13 years, and just as I can easily do with anything else I was obsessed, closed, and started believing in it as if there was not much else outside of yoga. I was defensive. I dropped my other activities one by one over the years.

I learnt yoga from senior teachers from all over the world and what I have come to realize is it doesn’t matter anymore, where they or I come from, yoga is yoga is yoga. It is a practice as any other.

Since my mental health broke down, I am taking medication, learning about myself by seeking professional help from psychiatrists and psychotherapists, leaning on and opening up to family and friends. The support and love I have received is the most important element in my healing process, along with my commitment to my husband and children to be the best I can be. I feel determined to live a clear life with them.

I am balancing activities, reintegrating some that I dropped years ago due to injury, such as running and finding some new ones such as Muay Thai – it amazes me what insights I learn about myself by being a beginner seeing things in a new way.

In reintegrating more active practices into my life, the yoga asana thread that I carry with me keeps me balanced and in check, both physically, and mentally. It has a powerful place in my life, but no longer does it have a power over me.

I am feeling more alive and connected than ever before. We all have to find our own dosages of activities just like we might do with medication. It takes time to see what works, what is supportive. I continue to play with and fine tune the balance of too much of something whatever it might be, to too little, and I can only hope I will continue to do so.

Thanks for taking the time to read!

In honor of November’s Prematurity Awareness Month, led by the March of Dimes,How Do You Do It? is focusing this week’s posts on The Moms’ experiences with premature deliveries, NICU stays, health complications, special needs, and how we’ve dealt with these complex issues

Last week at How Do You Do It? a brave bunch of Mum’s of Multiples (MoM’s) shared their stories of premature babies. There are birth stories, NICU stories, stories dealing with pain, and loss.

Please drop by and join the campaign to spread the awareness for prematurity. I have two posts up, the first is my emergency delivery story at 31 weeks gestation in Hong Kong, and the second post is a compilation of SMS’s I sent to Maher, Houda (my mother in law), and my parents from the NICU, updating them on the babies progress.

This is one that Maher wrote as part of a series: Parenting and Practicing Yoga. Against All Odds focussed on the period when our babies were in the NICU.

Thanks for dropping by. 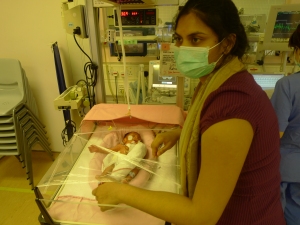 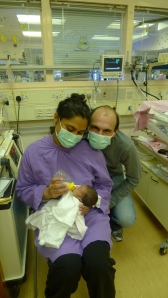 9 years ago today Maher and I got married. In Montreal. We were amidst close family and friends – a party we won’t forget.

There was dancing – from barefoot in the rain with Yerba Buena at the jazz fest, the garba and dandiya raas non-stop night, to the gypsy band “Soleil Tzigane” who used to play Friday and Saturday’s at Cafe Sarajevo, what used to be my hangout while we long distanced. We were thrilled that the musicians accepted to do our reception.

I can’t just grab a photo that represents the occasion from my phone’s camera roll or off FB, our wedding photos are stuffed into a steel box in Chengdu. Hard copy. 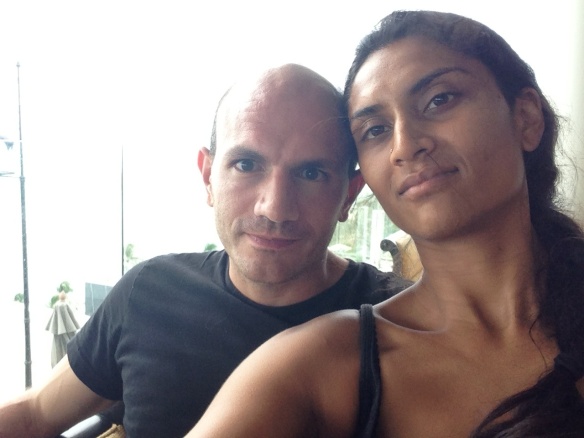 4 moves, a few mistakes, a stroke, IVF, NICU time, Leila and Rahul, long distance all over again on, and we continue to sneak moments together, learn about each other, grow in our relationship, listen to each other more intently, accept each other more sincerely, continue to compromise, let go, and love more deeply.

At least that’s what we try to do anyway. And hope for more years together.

“Mama can you tell to papa that I standed on this step, deep deep in the swimming pool?”

“Mama can you tell to papa that I ate all the carrots and tomatoes in the bowl?”

“Mama can you tell to papa that I can jump like a football player, high up in the sky?”

“Mama can you tell to papa that I sit like a big girl in the chair?”

He’s meeting us in NY guys. It’s going to be lots of fun.

Early one morning a couple of weeks ago.

Me: He’s on a plane, going to Houston, in America.

Me: Yah, to America like the pilgrims. But he’s on a plane, not a boat, so he’ll be there by tomorrow.

Leila: Can you be papa?

Me: What do you mean can I be papa?

They both look up at me, eyes gleaming. And smile.

Leila: Papa. Papa, I want to go to Etats Unis.

Me: Ok guys, come on, let’s go downstairs for breakfast.

To explain where stories come from, we helped Leila and Rahul make their own mini-books. I transcribed their stories.

The Dragon and the Princess
by Rahul

Once upon a time there was a princess who was stuck in the dragons cave.
And one dragon said, “Who is here?
The dragons blow fire at her.
She called the prince. He faught the dragons with his sword.
The dragons threw fire on the prince as well.
The dragons left the cave.

Once upon a time there was a dragon and a princess.
The dragon blew fire on the prince and princess.
Then suddenly, the nice fairy appears and fights with the dragon.
And the dragon flew away.

Nemo the Shark
by Rahul

Nemo the shark bites everyone. But he is scared of the dragon.
One day Nemo met the dragon in his house! (R: Mama put an excamashun mark)
The dragon blew fire on Nemo. It hurt a lot. (R: draw a dragon here. Blowing fire. – I managed a dragon .)

Both IV lines are just off. Down to oral meds- morale in the room is up!